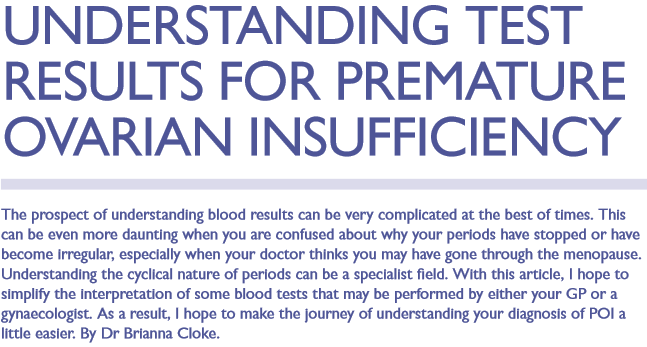 This may seem a counterintuitive test but it is standard practice to perform this if a woman has missed her period for a few months. Don’t be offended because pregnancy is much more common in young women than premature ovarian insufficiency.

FSH stands for follicle stimulating hormone. This hormone is produced by the pituitary gland in the brain. It has the important role of telling the ovary to start producing eggs and its level changes throughout a woman’s natural monthly cycle. However, when the ovaries stop producing eggs (which is what happens with POI), the brain can sense the lack of eggs because the oestrogen levels (see point 3) are low. The brain then tries to compensate by producing even more FSH, in essence to try to get the ovaries to work. This is known as negative feedback and is the reason why levels of this hormone are elevated in POI. There are, however, two important points about this test. Firstly, if you are having scanty or irregular periods, then it is best that this blood test is performed between day 2 and day 4 of bleeding. It is inaccurate to do this blood test later in the cycle as FSH levels increase normally in a natural cycle. If your periods have stopped altogether, then this test can be performed at any time. The second important point is that one result is not sufficient to make a diagnosis of POI. A diagnosis can only be established after two blood tests showing elevated FSH on two occasions at least six weeks apart. It is obviously distressing to wait for such a long time but it is critical to get the diagnosis correct.

These are the female sex hormones that are produced from the cells surrounding the eggs within the ovaries. Estrogens are also the hormones present in the combined contraceptive pill and HRT. The most commonly tested type of Estrogen in the blood is estradiol. If the ovaries are not producing eggs any more then the estradiol levels will be low on blood tests, and this is what triggers the brain to produce more FSH. In POI, low estrogen levels should be treated with HRT to prevent the bones thinning.

This is another hormone also produced by the pituitary gland in the brain. If you tell your doctor that your periods have stopped, he or she may test this hormone because high prolactin levels can cause periods to stop. However, prolactin levels are not altered in POI and your doctor may have just done the test in the first instance to work out why your periods have stopped.

The remaining tests are specialist ones and are more likely to be performed by a hospital gynaecologist.

There are many causes of POI and it can occasionally be associated with an autoimmune disease (although the cause usually remains unknown or ‘idiopathic’). An autoimmune disease occurs when a person’s own immune system attacks a part of his or her own body. Your doctor may test for anti-thyroid or anti-adrenal antibodies. If these are positive, then your doctor will explain this in more detail.

AMH stands for anti-Müllerian hormone. This is a relatively new test. At the moment it is used to check a woman’s ovarian reserve but currently, it can only be interpreted if a woman does not have POI. Furthermore, and unfortunately, it cannot be used to predict POI. About 5% of women with POI can fall pregnant spontaneously, but again, AMH cannot be utilised to assess the chances of this.

The human body is made up of billions of individual cells. Most of these cells contain 23 pairs of chromosomes. The chromosomes contain the 21,000 genes which instruct the body how to develop and work properly. Genetic conditions can occur either because of a problem with the chromosomes or with the individual genes.

A karyotype test counts the number of chromosomes and also checks if any of the chromosomes are mixed up. The most common diagnosis that can be picked up on a karyotype test in POI is Turner syndrome. A genetic test can look for abnormalities in the FMR1 gene, which is associated with POI. At the moment these are the only two well-characterised genetic conditions which doctors can test for but together they only account for the cause in 2–5% of POI cases. If you test positive for either of these, your doctor should refer you to a genetic counsellor.