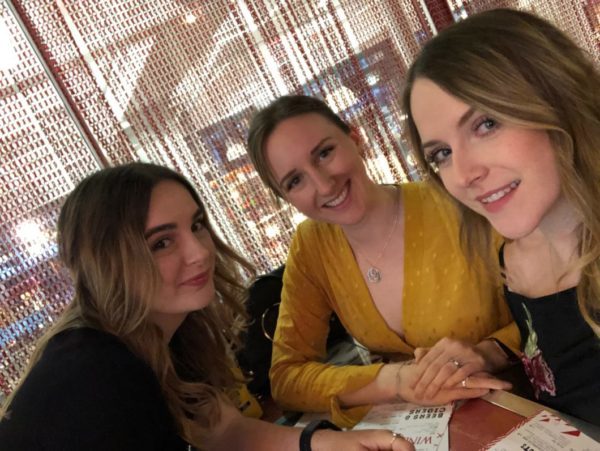 When Jessica was diagnosed with POI both her sisters decided to donate their eggs for her to use in future. Here they share their story.

After learning about Jess’ diagnosis of Premature Ovarian Insufficiency in 2008, when she was just 15 years old, we both knew we would do whatever we could to help her have a family, if that is what she wanted. In 2016 we attended a fertility appointment together. We found out we could freeze and donate our eggs. was the first proper stage in a journey we had already been on since 2008, however, it would need to be done before we were too old – about 32 according to the NHS Guidelines. We would also have to raise our own funds as the NHS do not support those who are freezing their eggs except in certain circumstances. At the time we were 30 and 25. We knew we had to get the ball rolling and low and behold after two years of discussing it with our families and saving up, it happened.

As well as this blog we have also documented our story on my Instagram with a series of video blogs, if you want to have a look just search for @sweaty.forgetful.me

Laura began her egg freezing and donation process in September 2018:

‘Bright and early on the 12 September 2018, I made my way to an appointment at Harley Street accompanied by my husband Garry and my sister Jessica. The process came about really quite suddenly, it was a combination of being fortunate enough to have the money to do it and well, my age, I was 32.I remember, never giving it a second thought, I was going to do this for my sister no matter what. We did think about the implications of my sister having a child which biologically would be the half sibling of any child I would have. I consider me and my sister to have the same DNA, what’s mine is hers, it’s just an egg, a bunch of non-descript cells. I was only really concerned about the idea of injecting myself every day, I have a crippling fear of needles. Thankfully my Husband took on that role, I think he really enjoyed injecting me every day. The injections turned out not to be that bad, I didn’t even bruise. I started off with one a day which then went up to two in the second week. The second injection was more uncomfortable, but nothing I couldn’t handle. I was also concerned about the effect all those hormones were going to have on me. I am a lawyer; I present cases in tribunals it’s not professional to be an emotional wreck. Again, thankfully I only suffered from tiredness and some bloating, just like being on a period. Before I knew it two weeks had passed, and my eggs were ready to be retrieved. After the small operation I felt so proud to be able to help my sister and give her hope of having her own children.

Now I am trying to conceive my own child, and it’s hard. It has changed my view on the eggs sat in that freezer. I realise more than ever what they are, what they represent, how important they are to her. They are no longer non-descript cells, they are a part of me, a gift to Jessica that one day hopefully I will have the honour of watching grow.’

Ciera began her egg freezing and donation process in August 2018:

‘The egg freezing process took a good few months in total as before you actually start on the injections to increase your follicle count you need to have a few blood tests and internal ultrasounds to check your own fertility and suitability to freeze, then you need to wait for the right point in your cycle. Plus, I had the added need to switch from the implant to the non-hormonal coil before I could start.  The injections part was only 2 weeks, then you have the extraction, after that you need to continue on with the injections for a few more days. I think probably the injections are the part most people fear, but honestly, they are not that bad. The first one was scary, I held it over my stomach and cried and laughed at myself for over an hour before my boyfriend took it and just did it. After that, I didn’t have any problems injecting myself, it wasn’t very painful, and I didn’t get any bad bruising.

The reality only really dawned on me when I laid down on the surgical table and put my legs in the stirrups. But even at that point it was more a realisation that after all the prep, injections, tests and appointments it was actually happening, and I was about to be put to sleep and have bits of me sucked out. I woke up about half an hour later at it was all done, and I was hilariously groggy but fine. I was a bit worried about pain after the procedure, but luckily, I didn’t really experience any. For me, the whole process was all clinical, and I can’t say that I clearly thought very much about it before or during and its only now, 2 years later, that I am actually dissecting and thinking about it in more detail.’

Overall, I would do it again, no question. Thinking about it in more detail now I just realise what an incredible gift it is, and such an amazing privilege to be able to give that gift to my sister. I truly cannot wait until the time comes for those eggs to be used, and to help Jessica through the ups and downs still to come, so she can get to a point where she will finally hold her child in her arms. More importantly, I am excited to spoil that child for the rest of its life and truly live up to be a bad influence Aunt.

Ever since I was diagnosed my sisters have always been there to support me, however, over the past couple of years I have been so overwhelmed by the astounding support they and my family have given me. When we first started this process, I felt a sense of guilt for allowing them to donate and freeze their eggs. Knowing that they would have to inject themselves every day and suffer with some of the symptoms was a horrible feeling. However, I know that if I were to carry a child using their eggs that this would all be worth it. I feel that I could potentially have a deeper connection with the foetus/baby knowing that it has some form of my DNA.

While the whole process is mentally in-depth, you need to discuss the future of potentially having half siblings and also take into consideration what my sisters partners opinions. I am so glad that I have such an open relationship with my two big sisters, I love them so much and am still in awe of their selfless actions.

They have given me an opportunity to become a mother and that is something I could never repay them for.