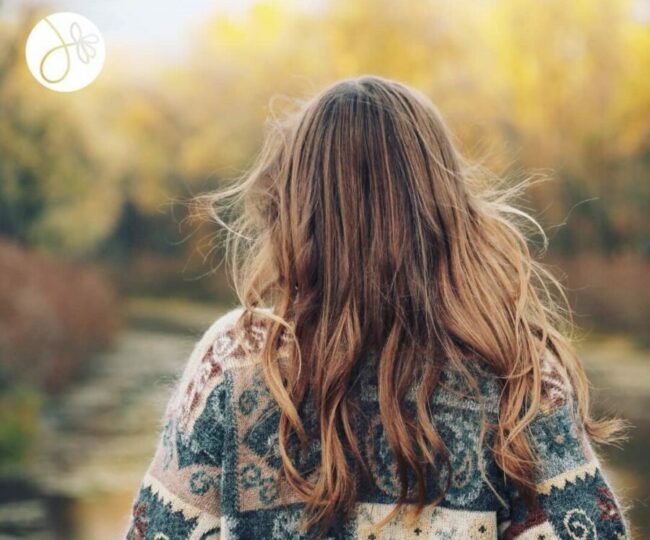 From a young age I was aware that my Mum had, had an early menopause, so I suppose you could say in the back of my mind I worried that I could go through it too. For the most part my periods had been ‘normal’ and ‘regular’ until my mid 20s.

Around the age of 25, I first experienced some irregularities. It funnily enough started with my period coming 14 days after my previous period around the time I got invited for my first smear test. I allowed myself to have this ‘one off’ experience and vowed if it happened again after 2 weeks or the following month I would go to the doctor. I decided to start keeping track of my menstrual cycle and would say for the next 3 months my period returned to ‘normal’ again. True to my word when my period started playing up I went to the Doctor, who simply said ‘we’ll give you a blood test, sometimes hormone levels do fluctuate’. A blood test later I got a text to say ‘everything was fine and looked normal’ so I carried on living life. I would say at least once a year from 2015-2019 I’d have this episode of a 3 month period where I would have bleeding every 2 weeks. Every time these episodes would occur I would go back to the GP seeing various different doctors who all told me the same thing, ‘that it can happen as hormones play up’.

During that 4 year period, I saw the Doctors that many times, that when I walked in the attitude was ‘Don’t tell me, its your period again?’ and I was asked what I expected to get out of these visits, as if they were expecting me to ask to go on the pill or something, I was reluctant to do this as I didn’t really want to mess around with nature, and especially when the Doctors didn’t seem too concerned. But I asked if they could run some tests and see what was going on, I was sure by this point they were as fed up I was about going back for the same thing.

In 2018, I mentioned (again) my Mum’s early menopause and another blood test was done, in this they ruled out 1)menopause and 2) PCOS and Endometriosis. By 2019, gone were the days of my periods coming after 2 weeks, but they were coming later, around 6 weeks. Going back to the doctor saying I had gone from one extreme to the next, also knowing I wasn’t pregnant, I again mentioned my Mum’s early menopause, I told them I had been researching the possibility of egg freezing, I knew something wasn’t right and I always wanted to be a Mum. The Doctor’s attitude was one of surprise, why would I want to freeze my eggs when my blood test didn’t indicate menopause? Perhaps because I felt I hadn’t been taken seriously, because I wasn’t happy they weren’t doing enough for me, because I didn’t want to be in a situation where children wasn’t an option, because it was too late. Looking back, I felt like there was not much support or advice and nowhere to turn to talk to someone who had experienced something similar. Options are there but how do you make decisions when no one wants to have a discussion with you? Low and behold everyone I spoke too, friends (who didn’t understand) doctors (who didn’t think it was worth it) family (who said its up to you) it left me pondering over the situation.

Fast-forward to 2020, Coronavirus hit and the world went into Lockdown. By this point my period was 6 weekly apart, this time everything was different, you couldn’t just rock up to the doctor and walk into an appointment, everything was done over the phone. This time I spoke to a relatively new doctor and she requested 1) a blood test and 2) a transvaginal scan. Finally I was getting somewhere. I had the blood test and this time the text read that ‘something was slightly out of range and to repeat in 4-6 weeks’. I thought that sounded slightly concerning. I had to chase both a repeat blood test and the transvaginal scan, eventually I had both. My next phone call appointment started with the doctor telling me that, ‘from the scan results, there wasn’t anything of concern from a pelvic point of view’ however the blood test results showed really raised hormone levels, so ruling everything else out it was looking more at indicating menopause. The doctor asked ‘if I was expecting to get that news?’ deep down the answer was yes, but I didn’t want to accept it. I remember my first words being ‘but I haven’t had my kids yet’ she said well ‘egg freezing is an option’ she also then started to talk about moving forward and what kind of HRT they’d put me on. I said I wanted to go for the egg freezing before I started looking at HRT, especially when I wasn’t having any symptoms of menopause at that time.

Although I’m convinced my body decided that now I had some kind of diagnosis it would now be the time to 1) let me experience hot flushes and 2) go the longest time without a period around 5 months. I had to wait around 3 months before going for my appointment at the fertility clinic, which I finally had in January 2021. It consisted of another transvaginal scan and blood tests, with a phone call consultation 3 days later. I knew from the initial consultation that things were not looking promising, the consultant said I was due to have a period within the next 2 weeks and that for people with POI they could go years where they had periods few and far between and that after my blood test they would know for sure if an egg freeze was an option. I was devastated when they confirmed my fears. My ovarian activity levels was that of someone 10 plus years older then myself and that egg freezing was not an option as there wasn’t anything viable for them to work with all they could offer was to help with an egg donation in the future. The 2nd February with a broken heart that is where my POI journey started.