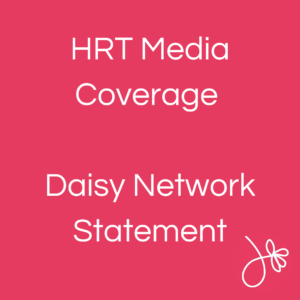 In line with todays media coverage on a study showing an increase of breast cancer to those taking HRT, Daisy Network still stands with our current opinion on the importance of HRT use for women with Premature Ovarian Insufficiency.

This study, published this week in the Lancet, is based on analysis of 108,647 postmenopausal women who had developed breast cancer. 51% had used HRT. The paper is not based on new data, but is amalgamation of many studies on HRT and breast cancer in order to provide larger numbers for analysis (called a meta-analysis). The study found an increased risk of breast cancer amongst users of HRT, both for estrogen-progestogen HRT and, to a lesser extent, estrogen only HRT.

Specifically relevant to women with Premature Ovarian Insufficiency (POI), the authors report that few women in the study had started MHT at ages 30–39 years, but among those who were still current users 15 years later, there was increased risk of breast cancer with oestrogen-progestogen and oestrogen-only preparations.

It is extremely important to note that this study did not assessing the more modern HRT preparations that are currently prescribed. For example only a very small number of women were using micronized progesterone and so conclusions could not be drawn for this this. Many of the preparations studied in this paper are no longer prescribed.

The study suggests that women who started HRT between the ages of 30-50 had an increased risk of breast cancer compared to postmenopausal women of the same age not using HRT. As most women age 30-50 are not postmenopausal – it would be more appropriate to compare the breast cancer incidence to age matched premenopausal controls.

Clearly the use of HRT needs to be individualised, weighing up your individual risks and benefits, however, taking in to account the multitude of other benefits of HRT in women with POI (symptom relief, bone, CV and cognitive function), HRT is still strongly recommended until at least the average age of menopause and we want to reassure women with POI who are currently using HRT.

Please read this statement by the British Menopause Society for more information on the findings.