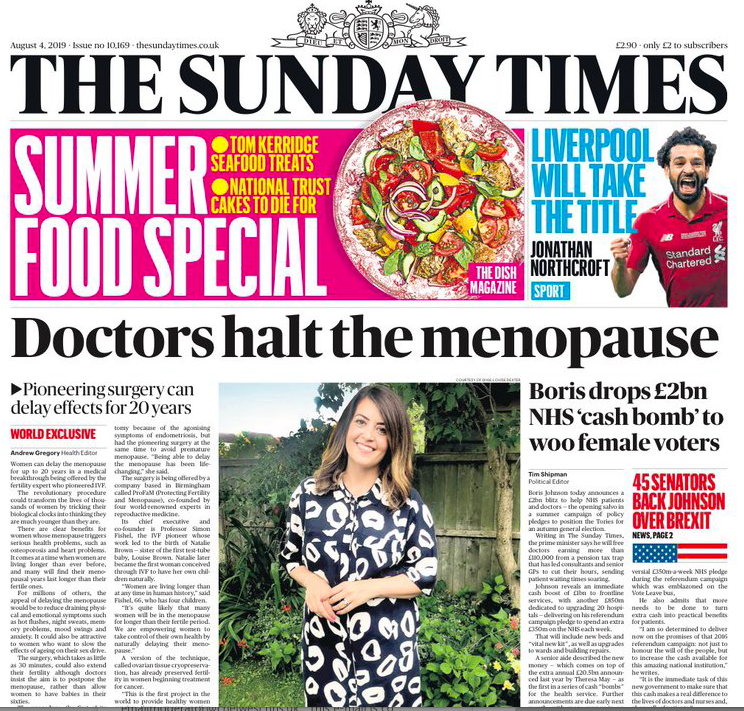 Recently a commercial organisation in the UK has started offering women a procedure which they claim can delay menopause by up to 20 years. The idea behind the project is that women will have ovarian tissue frozen while they are in their 20s or 30s and pre-menopausal. The ovarian tissue is collected through keyhole surgery and then cryopreserved. Years later, when they enter the menopause, the tissue is then reimplanted and would hopefully start producing hormones again.

The surgery is being offered by a Birmingham based company, ProFaM (Protecting Fertility and Menopause), and so far 10 women have had their ovarian tissue frozen but only one has had the tissue transplanted back. The procedure costs between £3,000 and £7,000 for the removal and storage of ovarian tissue, followed by about £4,000 for a regraft. Its chief executive and co-founder is Professor Simon Fishel, told The Sunday Times “Women are living longer than at any time in human history, it’s quite likely that many women will be in the menopause for longer than their fertile period. We are empowering women to take control of their own health by naturally delaying their menopause.”

The technique of ovarian tissue cryopreservation is not new and has been carried out for many years for girls and women who are having cancer treatment to protect their fertility. This is the first time however that healthy women are having the procedure done in the hope of delaying menopause

Although the procedure is now commercially available it is important to stress that there are still many unknowns regarding its safety and effectiveness. The rates of tissue survival and successful hormone production following re-implantation need to be better understood. Many experts therefore still feel that this technique should still be confined to a research setting and that we need a much clearer idea of the risks and benefits before offering it. Richard Anderson, the deputy director of the Centre for Reproductive Health at Edinburgh University, has performed ovarian tissue freezing for young girls and women for 25 years. He told the Guardian it was “old news” that the transplants could restore hormone levels, but added: “What is less clear is whether this is a safe and effective way of doing so.”

Haitham Hamoda, chairman of the BMS told the Independent: “This report explores a potentially promising concept for women at risk of medically or surgically induced menopause. However, when it comes to considering this in the context of delaying the menopause, further evaluation is needed to assess the safety of this technique, its effectiveness and the length of time such re-implanted tissue continues to function. Such assessment should also include a benefit/risk analysis particularly when applied in otherwise healthy women.”

Unfortunately this technique will not be beneficial for women with established POI, however it provides hope for the future as a way of preventing of POI, particularly in high risk women.